A lot of us are usually amazed at the idea of dark creatures existing among us. This is why it is so common for a lot of people to actually enjoy horror, thriller movies which show the most terrifying things possible. You could say that there the feeling of thrill and excitement of getting scared is something quite a number of people find fun. During Halloweens, there are a lot of scare amusements you can find like haunted houses, scare booths and many more. If you are brave enough, you can even go ghost hunting in places rumored to be filled with dark, mysterious and terrifying creatures that haunts different places. There are people who firmly believe that ghosts, witches, vampires and other elements of the dark really exist and they even admire what theses beings are capable of doing. These things have been believed to exist for centuries and they are romanticized in stories in books and films which gives people a rather far idea of the “reality” of what these creatures or being actually are.

Witches and vampires may be the most popular supernatural beings as of today. The rise of the popularity of the Harry Potter series have given a whole new idea to the practice of witchcraft and the movie Twilight certainly brought the image of vampires in a different perspective. Well, certainly experts on vampires and witches may argue that what these movies show is entirely different from what a witch and vampire is believed to be. For witches, the fact is there is actually different kinds of witches. It is believed that the practice of witchcraft vary in different countries. For vampires, they may not actually be people with fangs and suck blood by biting through your neck because there are actually people who are self-proclaimed vampires and yes, they do drink blood but they draw it in a sterile and through a donor. Weird fact, right?

Regardless of how they are being portrayed and how they actually are, we can admit that there are some among us who are fans of these beings. You may already be thinking that for this year’s Halloween, you will dress up as either a vampire or a witch. So to give you costume ideas, we’re here to show you our latest 2016 witch and vampire costumes. 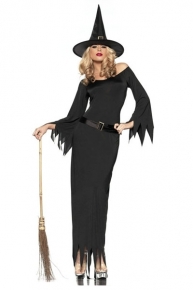 Vampires are beings in folklore that have been believed to survive by drinking the blood of humans. Based on what we read in books and see in movies, vampires are nocturnal creatures and they can get burned under the sun. They can also transform into bats and fly through the night to look for the next human they would suck the blood from. That definitely sounds like one hardcore being and it would never get old school to dress up as a vampire this Halloween. Your kids might want to join in the vampire fun as well so you better be prepared when they say they want to be a vampire too. They may be little but they can be fierce enough to nail any vampire costume, for sure. This Prince of Darkness Boys Vampire Halloween Costume will make your sons stand out in the crowd. It comes with a vest with attached sleeves, cape with attached collar and a dickey with attached tie and pin. Make your daughters look like the queen of the night in this Vampiress Girls Halloween Costume which comes with a full length dress and choker with collar. 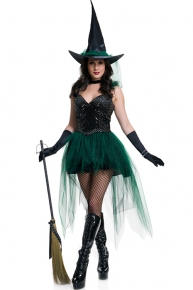 Halloweens are supposed to be scary but seeing cute kids in adorable costumes is just to die for. Just like this Vampire Boys Toddler Deluxe Halloween Costume which comes with a jumpsuit with satin sleeves, attached vest with gold buttons, satin jabot with bat bow tie and detachable satin cape. No one will surely be able to resist not saying “Awww…” once they see your kid in this adorable vampire costume.

Witches are known to us as mostly, almost entirely, just females. Although it may not be the case but the traditional witch with the horrifying cackle riding a broomstick is the typical witch image we know. But as we know, witches are usually portrayed as ugly, old women. Come on. No one wants to be looking ugly during Halloween. So while staying traditional but not going on all the way, you can wear this Bewitching Witch Women Halloween Halloween Costume which comes with a dress with organza and velvet collared bodice, wide belt and a matching hat. You may be a witch but you’re certainly one that everyone would want to get bewitched by.

A lot of little girls love pink. You may be wondering if your kid wants to become a witch, could you come up with a costume your daughter will be thrilled to wear? Guess what? We have two words for you. Barbie witch. That’s right! This pink Barbie Witch Girls Halloween Costume will definitely get your sassy little girl squealing with excitement for the Halloween. The costume comes in with a pink Barbie dress, a headpiece and gloves. The perfect witch costume for your sassy, girly daughters.

Halloween is a fun time for dress up so keep your options wide with a variety of different costumes. Whether you’re going traditional or spiced up costumes, you can bet that The Costume Land has numbers of items to choose from. Check our store for more costumes. We bet you can find whatever you need for your 2016 Halloween costume. It’s sure approaching fast so start checking for costumes now because a lot are starting to get sold out. Make sure you get them first!