The night of princesses, animal print, and cutesy clowns is upon us. Dress your little girl in one of this year’s top 10 sought after Halloween costumes full of fun ways to accessorize each costume. We are not going to lie; it’s going to tough to decide!

Be the cutest clown around this Halloween with this Clownin’ Around Girl’s Costume! It’s full of fun patterns in black, white, and bright pink that will make your little jokester “POP” like a Jacklyn-in-the-Box. This costumecomes with the dress, hat, necktie, fingerless gloves, and cropped leggings! Top off your costume with a top hat, Circus Sweetie Pink Nose, rainbow clown eyelashes, and clown makeup! 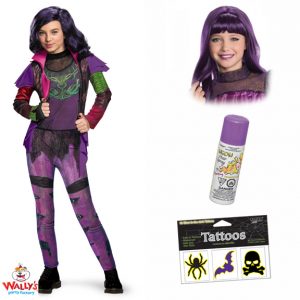 It will be happily ever after for your daughter when she plays the part of Maleficent’s daughter in the officially licensed Mal Isle of the Lost costume! The costume includes the jacket, top, pants, and a single glovette. What’s Mal without the purple hair? Use temporary purple hair sprayor throw on a purple wig to complete the look. For fun, add a glow-in-the dark tattoo on your little girl’s cheek. 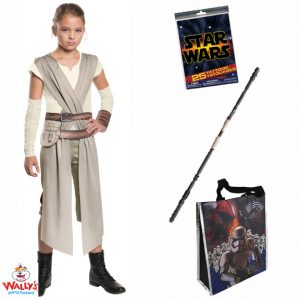 Search the galaxy for the long lost Luke Skywalker as the scavenger Rey from Star Wars Episode 7 officially licensed costume! It’s going to be a bumpy road as the battle for whom gets the most candy has begun! To defeat the others you little Rey will need her staff and Star Wars tote to put all the candy in! The costume contains jumpsuit with attached Apron and Belt. Add a temporary tattoo to your little fighters look! 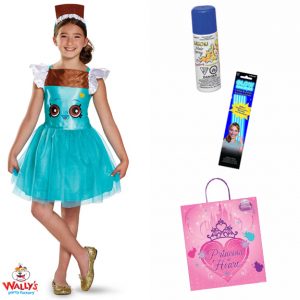 She is sure to melt your heart with this sweet as can be Cheeky Chocolate Costume. The Shopkins super sweet costume includes the dress and headband. Make this costume extra sweet with blue temporary hair spray, blue glow sticksfor the dark, and pretty pink bag to hold your sweeties sweets! 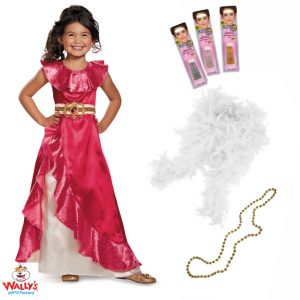 The first ever Latino Disney Princess Elena is full of adventure! From saving her magical kingdom, Avalor, to learning her role as princess – who wouldn’t want to be like her?!  Give your little princess the royal treatment by dressing her in the beautiful red gown, belted with an ornate gold buckle, hints of glitter on her eyes and arms, a feather boa, and gold beads! All hail Princess Elena!

It’s going to be a bone chilling Halloween this year – wait…AVALANCHE! Your little girl will save the day as Everest Todd – rescuing all her pals trapped in snow! The Paw Patrol costume comes with the dress, hat, and pup pack. Complete the costume with a Paw Patrol bucket, temporary tattoos, and black face paint for her nose! 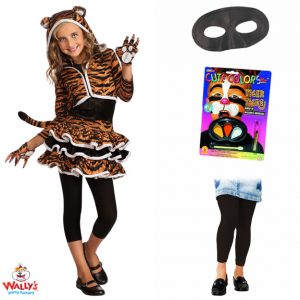 You have got to be kitten me! Your little girl will make the purrfect Tigress this Halloween, showing off your sense of wild style! The Tigress Hoodie Costume includes the dress with attached hoodie, tiered ruffle skirt with an attached tail, and sassy tiger paw glovelettes. Don’t stop there! Finish off this purrfect outfit with the tiger makeup kit or black half mask and black tights! 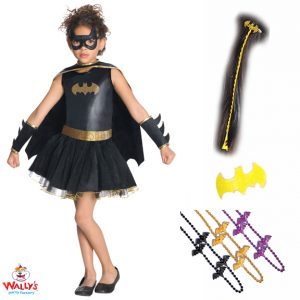 Na, Na, Na, Na, Na, Na, Na, Na, BATGIRL! She will sparkle and swoop through the darkness on Hallows’ Eve night, making sure no evil lurks in the shadows.  The costume is an officially licensed DC Superheroes girl’s dress with attached cape, a gold glitter batman symbol, a black eye-mask, and matching gauntlets. Add fun accessories to the costume with the Batgirl hair extension, Batgirl glitter tattoo, and bat beads. 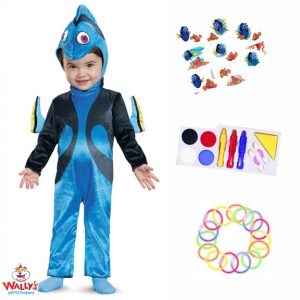 Just keep swimming; just keep swimming – till you fill up your Halloween bucket! WAIT! What was I supposed to do? The Finding Dory costumeincludes the jumpsuit, headpiece, and detachable tail. For added fun, try painting her face with face paint to blend in with the costume, add a temporary tattoo, and give her glow-in-the dark bracelets so she does not lose her way in the dark. 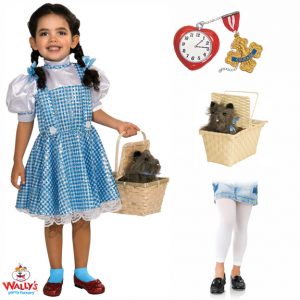 Follow the yellow brick road to Halloween fun! Your little girl is sure to make friends on the way to Emerald City in her Dorothy costume. The costume comes with the dress and blue bow hair ties. Complete the outfit with Toto in the Basket. To represent her friends along the way, add the Tin Man Heart Clock and Cowardly Lion Badge of Courage. If it’s a cool Hallows Night, have white tights to match her outfit!

From Disney characters to Superheroes, clowning around couldn’t be more fun! Follow the yellow brick road to Halloween costume fun!