When it comes to Halloween, there are two types of people in this world: those who dress as a zombie and those who somehow find a way to dress up as a one-night stand. Creativity is key when picking the custom clothing for a Halloween costume, and no one wants to see another scantily dressed bunny or guy wearing a Scream mask, so really, try to dig deep and think of something good else.

We all agree that there are thousands of articles on the internet about Halloween costume ideas, however, how many of them only gather the most creative ones all of them related to trending stuff that’s happening? Just this one!

Keep reading a you’ll find a nice selection of ideas based in things that occurred this year, and also some of the most amazing ideas from recent years!

Some of these are funny, some are trendy, and some are just plain weird, but they will all make you less of a bore at your next costume party. If anything else, being dressed as the rat that carried a slice of pizza down to a New York City subway is a great conversation starter.

In case you haven’t seen the commercials, the Jake from State Farm ads are some of the best things television has ever given us. When an angry wife finds her husband on the phone late at night, she takes it from him thinking he is talking to another woman. Demanding to know what the “woman” is wearing, Jake awkwardly replies, “um, khakis.” This hilarious TV spot has gotten people’s attention, to the point where people have dressed as Jake from State Farm for Halloween. This is sure to give people a laugh, and show that you can be a little creative this year. In the R-rated super-hero hit of the year, Ryan Reynolds plays a badass, lighthearted, and sarcastic antihero. Accompanied by his dark sense of humour, he attempts to seek revenge on the man who disfigured him and win back the girl he had fallen in love with. Drop the cliché Superman and Batman costumes, and dress as this amazing character this year. Cynicism not included. 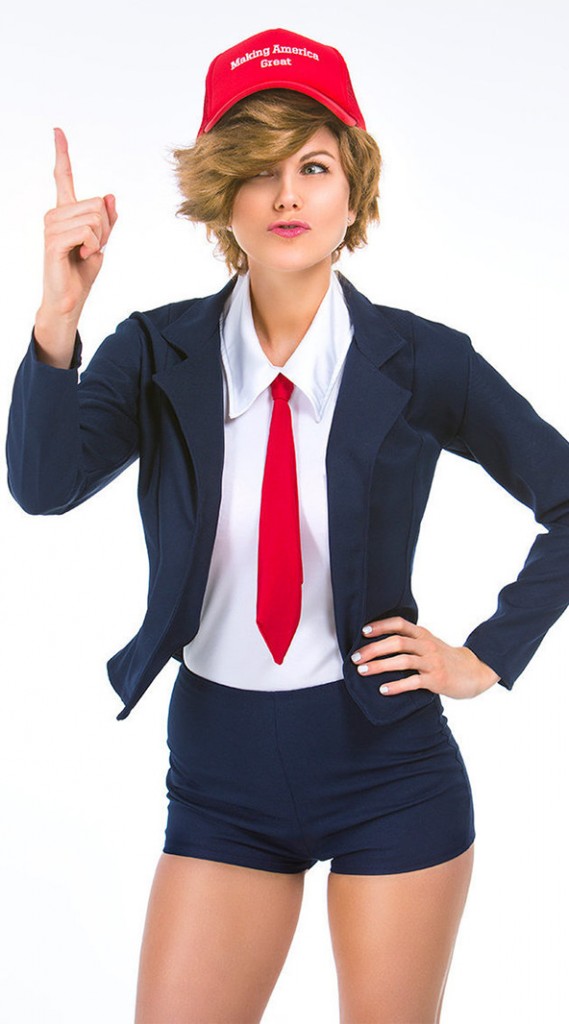 Personally, I feel like the election going on in the United States right now seems more like a bad reality TV show than a crucial presidential election. And as the main catalyst in this hurricane that is somehow being calling an “democracy,” Donald Trump deserves to be parodied. Dress like him this Halloween and have all your friends laughing. After all, someone has to make America great again, right?

Ghost from Game of Thrones I myself have never watched Game of Thrones, (please don’t crucify me), but I would have to be a hermit to not know how popular the show is. I would be a rich man if I had a nickel for every time I got caught in a heated conversation about the HBO show, during which I feel as if I am in another country where I don’t speak the language. If you are a normal person and avid watcher of the show, unlike me, then you know about Ghost, who is Jon Snow’s dog. He would make a great costume for any Game of Thrones lover. And if you are lucky enough to have an albino dog, beard, and long hair, you and your dog can make the perfect costume pair. Snapchat has been a go-to social app for a couple years now. Personally, I communicate more with the picture and video sharing app than I do over text or god forbid an actual phone call. Call me a millennial, but I think that apps like this are the future of communication. The geniuses over at Snapchat recently added the facial filters that have become endlessly popular. One of these is the odd but funny filter that makes it look as if you are vomiting up a rainbow. Somehow decided to make this odd filter even stranger and funnier by turning it into a real costume, achieved with some careful makeup work. Nothing is more 2016 than this. The faces of the most popular commercials nowadays have become household names. Flo from Progressive, Jake from State Farm, and now Lily from AT&T. Unsurprisingly, Lily is not her real name; the bubbly character is played by actress Milana Vayntrub. Still, people have developed a cult-like following for he. Grab yourself a button down, wig (if you have short hair) and a name tag, and easily be the most creative one at the party. 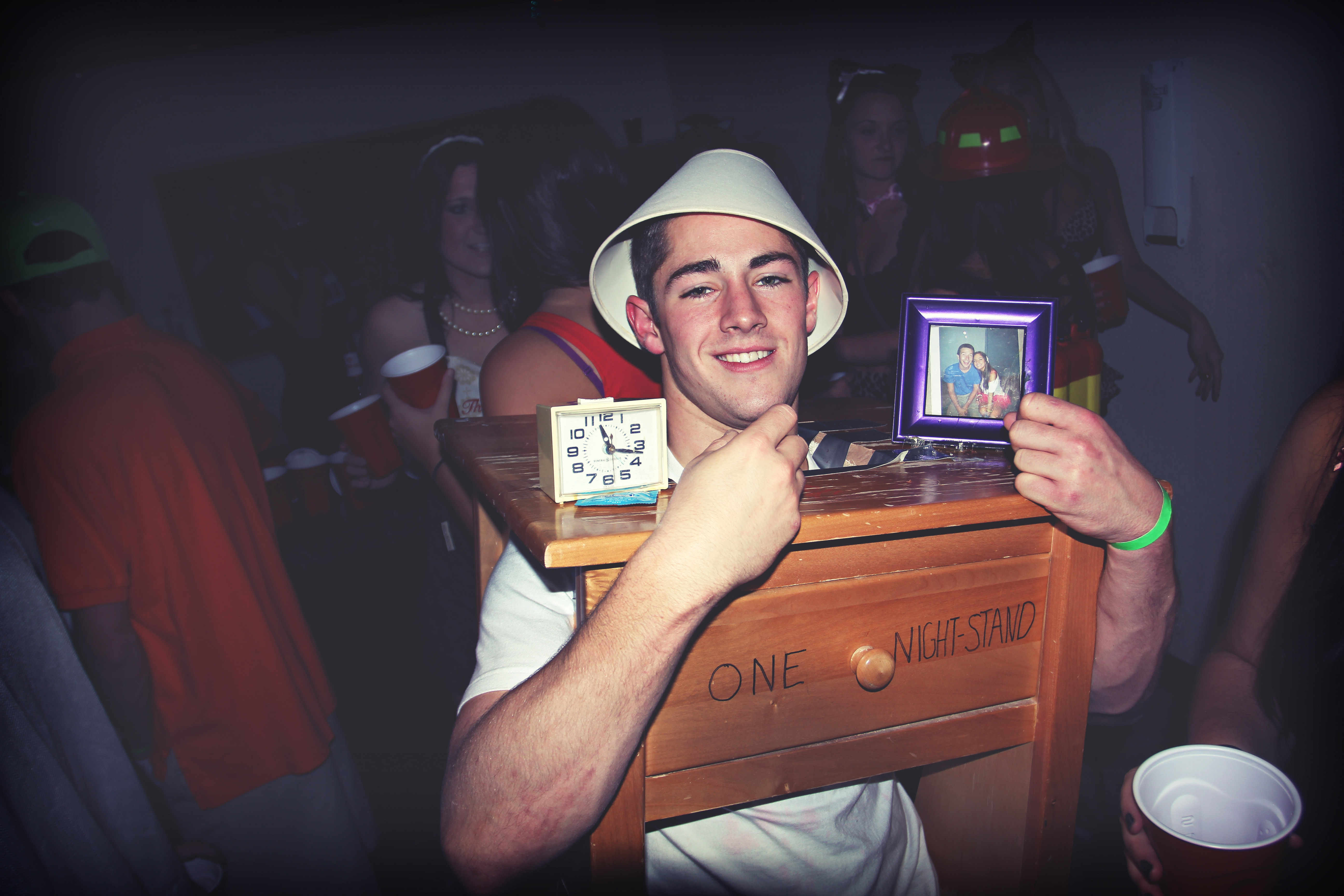 In the age of Tinder and all sorts of other excuse to avoid real face-to-face communication, it is almost impossible to avoid the hook-up culture that has engulfed modern society. I think that we are all familiar with the infamous “one night stand,” that is usually the outcome of this faceless communication. Keeping up with the times, someone had the bright idea to turn this encounter into a Halloween costume, but you can tell your friends you came up with it anyway — they won’t know.

I’m not sure how the phenomenon began, but all of a sudden it seemed as if everyone was obsessed with Sriracha hot sauce. The sauce comes from Thailand originally, and is meant for seafood, but I have seen people put it on every type of food you could possibly think of. Go the extra step, and be a bottle of Sriracha this Halloween. Rick and Morty is a witty, sci-fi animated comedy from the genius minds of Dan Harmon and Justin Roiland. Those who watch the show are hardcore fans, and those who don’t, don’t even know it exists; it’s that kind of show. This a costume that requires a buddy, but if pulled of right you will light up the party. One person must be taller than the other, and the blue hair might be tough to pull off, but no one said looking good was easy. Flask is optional. After a ten year hiatus, the seventh instalment of the Star Wars franchise called The Force Awakens was released to great appraisal by both critics and fans in late 2015. This movie, and the upcoming two that will make up the third trilogy of the series, have followers ecstatic. In case you haven’t seen the film, it introduces a bunch of new characters including a new drone called BB-8 which has become a favourite. Of course, the toys and controllable robots followed and it got me thinking that it would make a hilarious Halloween costume.

Unsurprisingly, people have already thought of this, but it’s still a great option. Plus, what are the odds that someone else at your costume party had the same idea? Bonus points if you’re a kid, because the costume works much better. Want to turn your night into a live movie where you are the star? Try dressing up as a YouTube channel, and you can turn your dream into a reality. One example includes a guy who got real creative, and ambitiously titled his video, “Drunk guy makes out with hottest girl at party.” This is a great way to have all your friends laughing, and it’s a pretty easy DIY costume to pull off if you don’t want to go costume shopping. If Donald Trump is coming, then the Brexit shouldn’t miss the party. Netflix and Chill is the classic millennial date. In this age where real dates are a rare or nonexistent occasion, streaming House of Cards and making popcorn is considered romantic. Choosing an activity as an inspiration for a Halloween costume rather than a person or thing allows you to be very creative.

The Most Interesting Man in the World The Most Interesting Man in the World, also known as the Dos Equis guy, retired from his role this year. Actor Johnathan Goldsmith was sent off to Mars in his final commercial spot, but his character still remains a household name. Get either a fake beard and a wig, or grow the characteristic grey beard and hair yourself, and you have yourself a great Halloween costume. Oh and make sure to have a Dos Equis in your hand to fully complete the look. “Stay thirsty my friends.”

The Pokémon Master, AKA Ash Ketchum (or any of the 150 Pokémon)

I can tell you won’t probably be the only one but hey, it’s seriously competing with Donald Trump and the Brexit for being the thing of the year.

Apart from these ideas, we want to show you some of the coolest ideas from last years we could recicle this Halloween!

Was it gold and white or blue and black? It might just remain a mystery, but now you can confuse Halloweeners all over with this costume. There’s no way to be more creative than this. Everyone will want their photo with a Photoshop effect in real life, who wouldn’t? Though apparently this cute grumpy creature was born in 2013, it was just this year when the most adorable cat in the planet has become an Internet star for good. We’re all a bit grumpy cat deep inside, aren’t we? Alright, so maybe this Halloween costume idea is not that related to 2014 as the previous ones, but it’s definitely one of the most creative and eye-catching of them all, isn’t it?